Changes to targetingMiscViewFull.py: As above. 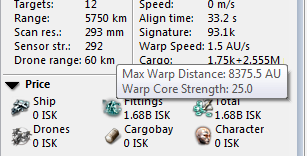 Fixed an obscure bug in the warp scramble effect too. I would like to expand this to make it so that projected warp disruption effects modify the fit's warp core strength as they currently do not appear to do that.