The current broadcaster-transcoder largely follows a request-reply flow. Use HTTP in order to leverage existing tooling, services, and experience. Allows orchestrators (transcoder managers) to scale without writing too much custom code around our networking protocol. 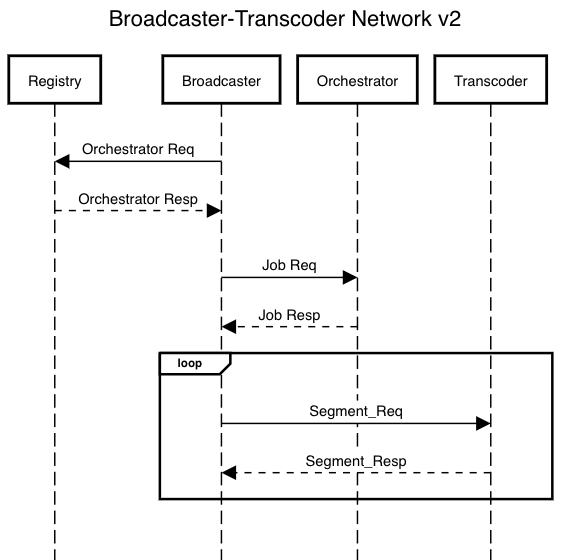 Using this proposed protocol, object storage essentially becomes a "drop-in" feature that we can incorporate whenever appropriate. We focus on direct uploads from the broadcaster to the transcoder ('local' object storage). There is an addendum that sketches out how object storage could work within this protocol.

Needed to publish orchestrator URI. Look up URI based on address assigned by the protocol. Options:

Broadcasters can send a JobReq to an orchestrator at any time. For example, maybe they want to renew their credentials to restart streaming after an offline period, or the existing segment transcoder endpoint seems unresponsive.

The onus is entirely on the broadcaster to confirm the job with the orchestrator, and to send segments to the transcoder. Transcoders are no longer under any obligation to initiate jobs or seek out segments from the broadcaster. This greatly simplifies the amount of guessing the transcoder has to do, compared to the current protocol. See Push vs Pull.

This design intentionally minimizes the amount of state that a transcoder needs to hold for a job. Hence, the broadcaster can stop sending segments anytime without explicitly stopping the stream. Preferably it also minimizes the amount of Livepeer infrastructure that is required (bootnodes etc), and in general minimize the entities that stand in between a broadcaster and a transcoder.

We can build a stateless HTTP-based relay protocol using similar ideas as presented here, but the current focus is on the broadcaster-transcoder flow.

Currently, our system is a bit of a hybrid between pull and push: the transcoder sends a TranscodeSub request to the broadcaster each time it begins transcoding (pull), while the broadcaster pushes segments out once they are ready. HLS and DASH are purely pull-based models, where the player polls for new manifests periodically. This proposal is a pure push based model, in which the broadcaster would be responsible for notifying the orchestrator of new segments, without waiting for an explicit request from the transcoder. (Naturally, the orchestrator/transcoder would have to check whether it was actually assigned to the job, but this can be a quick check of the HTTP headers without downloading the body of the request.)

In the context of Livepeer, the question of push vs pull is fundamentally one of state management: who should be responsible for maintaining the state associated with a job, setting it up, and tearing it down? We also want to make it easier for transcoders to make management and scalability decisions, without being hindered by intrinsic characteristics of the networking protocol.

Much of the reasoning for a "push" based system is outlined here livepeer/go-livepeer-basicnet#34 . Although that initial proposal was oriented towards a libp2p-based system, most of the benefits of a broadcaster initiated connection ('push') still hold. The more salient points are reviewed below.

Pull has many downsides in the context of Livepeer's broadcaster-transcoder flow, and few benefits. With a pull based model, the onus is on the transcoder to constantly ask: is this job still active? Broadcasters are much more likely to have problems. They are less technical, there is a human in the middle trying to set up the stream and manipulate the capture setup, streams are much less likely to EOF cleanly, and so forth. The transcoder doesn't know the true state of the job; only the broadcaster knows, and we can't rely on the broadcaster to be reliable. Fundamentally, transcoders are persistent, while broadcasters are not.

Long-running jobs impose an expensive externality on the network. For every job that isn't shut down cleanly, the transcoder has to constantly check if new segments are available, for the duration of the job. With thousands of jobs, this adds up. Currently, if a transcoder needs to restart, it will attempt to resume "active" jobs by sending TranscodeSub requests repeatedly. Most of these requests will never get a response. Fortunately, this only takes effect if a transcoder needs to restart in the middle of a non-EOF'd job.

However, the situation gets worse if the transcoder is responsible for fetching from an object store entirely using a pull-based model, eg, acting as a HLS player. Unnecessary requests are made for the lifetime of the job, potentially every 4 seconds. Many services, including S3, charge per GET request. (Note: be careful about putting a CDN in here. Cloudfront's per-request pricing is more than 2x that of S3.) This is objectively worse than our current system, which only polls when the transcoder is trying to initiate a job; thereafter, segments are delivered via push without further transcoder intervention.

Polling works for HLS or DASH because the cost to the requesting client is limited: it only has to request one manifest every so often, and stops as soon as the user is finished watching. Transcoders would need to poll for every job that was active. Polling is also especially undesirable for object stores that are outside the transcoder's control, eg provided by the broadcaster. If we decide to "race" the transcoding among multiple nodes, then the implications of polling go even deeper, and that needs to be considered.

Any pull-based system would require more active management in order to load balance jobs among different transcoding nodes, especially if the load needs to shift mid-job. At the very least, operators need to tear down state in one transcoder and bring up state in another. With push, the per-job state management is minimal, limited only to tracking the segments that have had work done.

The proposed split between JobReq and SegmentReq enables feedback and failover, which gives all parties more control of the behavior of the system. If a transcoder appears unresponsive, the broadcaster will get immediate feedback saying so, eg via a failed TCP connection, a HTTP error code, etc. The broadcaster can then send another JobReq to the orchestrator to request a different segment transcoder. The feedback is useful as a diagnostic tool for the broadcasters. Contrast with a pull based system, where one first has to infer that no work is happening when there should be, and trace the problem from there. For broadcasters, this is an especially opaque and frustrating experience, where they have no visibility into the network and cannot help debug.

State management is much easier. In particular, transcoders only need to allocate resources when a segment comes in. They don't need to check for segment availability or take any action when segments stop coming in. They either transcode a segment upon request, or do nothing. Simpler state management has especially large benefits for failover. For example, a segment transcoder may be briefly knocked offline. SegmentReq feedback would make this immediately obvious (if the orchestrator’s internal monitoring doesn't catch it first). The broadcaster can then re-request JobReq from the orchestrator, which can direct the broadcaster to a different node. After the segment transcoder comes back online, there is no uncertainty about whether the transcoder should continue with the original job, because there is no state to tear down.

Load balancing also becomes a matter of distributing the work at the moment of the request. Coupled with HTTP, this falls squarely into the extremely well-trod space of distributing Web requests. That opens up a world of options for transcoders, who can now use mature tools and services to manage their operations.

Delayed jobs are also a better fit for the push model, in order to reduce transcoder uncertainty about when a job will start or resume. With push, there is no uncertainty, because the transcoder doesn't need to be aware of the broadcaster's state, or be constantly seeking it out.

This proposal is complementary to any object store system, and in fact resolves a number of issues related to using object stores.

First, a clarification on what the request flow would look like with a transcoder-owned S3. Note that the v2 networking proposal is also accommodating towards broadcaster-owned object stores, object stores that aren't as feature-rich as S3, or plain HTTP endpoints, etc... 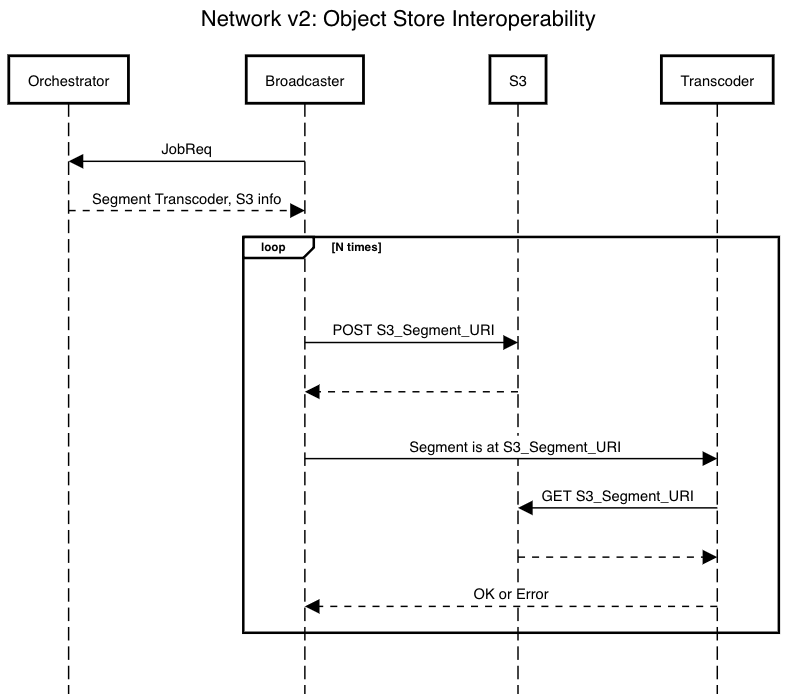 The key point to note is that the segment transcoder can either receive raw segment data, or an URI pointing to a segment that it can fetch from. This URI is provider-agnostic and completely decouples the networking and transcoding from the mechanics of managing an object store system.

The use of SegmentReq may seem redundant after the upload, but actually serves three important purposes.

For the reasons outlined earlier, polling should be avoided. Services such as S3 have several notification mechanisms (SQS, SNS, Lambda) and other cloud vendors likely have their own mechanisms. Transcoders would then be responsible for setting those up themselves. However:

Transcoders are still free to set up their own notifications system, and ignore SegmentReq if they can authenticate the upload. But we should not make this mandatory; if we can help bypass the inherent complexity of using an object store system, we should.

Note that if transcoders elect to provide a S3 bucket for broadcast uploads, it will certainly be their responsibility to monitor its usage, ensure that segments are cleaned up, etc. That is not part of the Livepeer networking protocol, although we may elect to implement such management assistance as part of a S3 sub-module.

Sending SegmentReq also enables the broadcaster to bring their own object store without any explicit support from the transcoder. The segment transcoder simply needs a URL to fetch a segment from. Additionally, transcoders can use other object store systems that might not have a notification mechanism baked in.