Rationale: make drop code simpler and more maintainable. The current implementation does rather simple thing by tangled means using wrong indirection. I'm gonna mitigate the complexity so that issues (#14035 is one of them) could be resolved without ugly workarounds.

~~This PR is pretty much WIP (just a start actually) so it's too early to criticise the intermediate changes, but I want to share the intent. It's still WIP, but suggestions are welcome.~~ 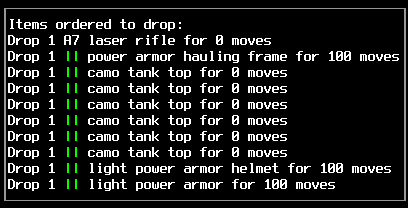 - I plan to show the drop costs (and the actual list of dropped items) in the multidrop dialog (in a further PR) - Volume recalculation was fixed (it's not linear because of the PACKMULE and DISORGANIZED traits. The previous code didn't take that into account). This will be useful for recalculating volumes without cloning g->u (in a further PR) - Dropped items are handled correctly: when dropped in a vehicle (after taking them off or if the storage capacity is exceeded) they stay in the vehicle when they can - The terrain where you drop items is described better (e.g. "pavement"/"grass"/"dirt" e.t.c instead of simply "ground" for any terrain).

Known issues: There are still player-oriented messages in the activity handlers, so when NPCs drop items, the game says that its you who drop them. I'll address that in a further PR.