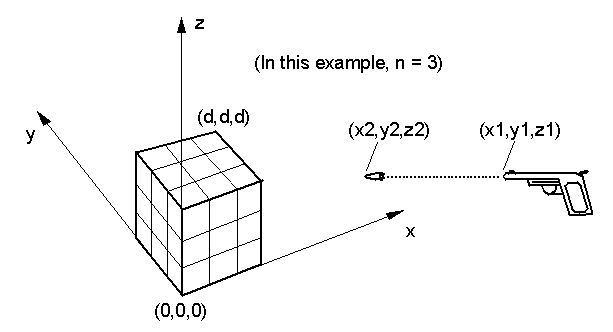 A cube is suspended in space. A Cartesian coordinate system is defined with its origin at one of the bottom corners of the cube, as shown in the figure. The cube has side dimension d, so its opposite corners are at coordinates (0, 0, 0) and (d, d, d). The positive z-direction of the coordinate system is "up" with respect to gravity.

The interior of the cube contains partitions with uniform spacing in each dimension, so that the cube is partitioned into n3 mini-cubes of equal size. The partitions are thin and watertight, and each mini-cube is filled with water. The total volume of water in all the minicubes is d3.

A gun fires a bullet which may hit the cube. The muzzle of the gun is at the point (x1, y1, z1). The point (x2, y2, z2) is a point on the bullet's path that defines the direction of the bullet. The bullet does not shatter the cube, but wherever the bullet touches a side or interior partition of the cube, it makes a small hole. Bullet holes may be made in the sides, edges, or corners of the interior mini-cubes. Water, influenced by gravity, may leak through these small holes. All the water that leaks out of the large cube is collected and measured.
Input