The collision works fine with shapes like a drawn circle

But when I try to use it with an image instead of a rendered shape, it thinks it collides slightly before it reaches the image. The larger the image, the larger the error.

Here is where it collides on the images: 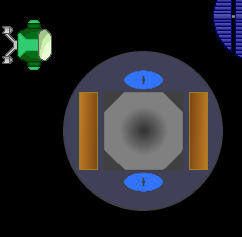 [s being the solar panel, seen in the "smaller image", and p being the player.]

The size.X and size.Y of each image is the same since it's a circle

The centers are calculated correctly and this exact line works with shapes [you can see the yellow outline in the first image, that's the shape it works with.]

Am I doing something wrong? Why would there be an error caused by this when the calculation has nothing to do with the image itself?

Here's how the images are rendered, I assume the problem lies with that somehow:

[g being the generator, seen in the 'Larger image'

The shape is drawn based on it's center as well.